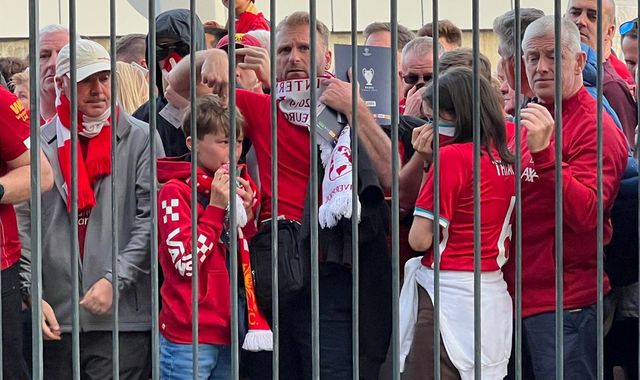 France’s sports minister will meet with UEFA and other officials to discuss the scenes of violence in the Champions League final.

French police have been criticized for repeatedly firing tear gas and pepper spray at Liverpool fans while waiting to enter the stadium in Paris Saturday.

Amelie Oudea-Castera, the sports minister, said the meeting later this morning – which will include police, stadium officials and the French Football Association – aims to “learn lessons” from the event.

The development has not been fully investigated, which has been demanded by the UK.

She blamed Liverpool fans on Monday morning, telling French radio RTL: “What happened was first this mass gathering of British supporters of the Liverpool club, without tickets, or with fake tickets.”

Culture Secretary Nadine Dorries has urged UEFA to launch an official investigation, saying the images and testimonials from Liverpool fans and the media are “deeply concerned”.

“It is in the interests of everyone involved to understand what happened and learn from these events,” she said.

Minister Chris Philp said he was “horrified” to see pictures of children and disabled fans sprayed with pepper spray, and he saw “no obvious justification”.

He told Sky News’ Kay Burley: “We need UEFA to properly investigate what happened and get to the bottom of it.”

Ian Byrne, the Labor MP for Liverpool West Derby, was at the game in Paris and said he had never witnessed such scenes since the Hillsborough disaster in 1989, when 97 Liverpool fans died after a crush developed at Hillsborough Stadium in Sheffield.

He said he saw a similar “narrative of lies” beginning to build.

French Interior Minister Gerard Darmanin said British fans without tickets had caused delays which led to thousands of fans being stranded outside the perimeter fence for hours.

UEFA said “thousands of fans” tried to enter using fake tickets, which would not work on the turnstiles.

The Paris police headquarters said it then “used force” to try to enter the place, prompting others to do the same.

Mr Byrne has written to Foreign Secretary Liz Truss, urging her to demand a formal investigation and an apology from UEFA and the French authorities.

In his letter, he said: “The French authorities and UEFA are simply covering their backs with this story.

“As a Liverpool fan I was in Paris for the game and can honestly say the situation off the pitch was one of the most horrific experiences of my life – and as a Hillsborough survivor, I don’t make that comment lightly.”

He called for an end to the treatment of football fans as “second-class citizens” and “animals”.

Sports Minister Nigel Huddleston voiced his support, saying it was unclear why access to the stadium was so restricted.

Merseyside Police observers said the majority of fans waiting outside the security perimeter had behaved in an “exemplary” manner, which did not warrant the use of tear gas.

The chemical is said to have been deployed again in the Cours de Vincennes fan zone after the final whistle.

“One Hell of a Night”

Kelly Simmons, director of women’s professional play at the Football Association, said it had been a “hellish night”.

She said she was crushed entering, unable to move for 90 minutes.

She said that all the fans near her “behaved impeccably.”

“It was just absolute volume and nowhere to go because no doors were opening,” she said.

She said she was also sprayed with tear gas on the way out when she was close to a “little skirmish”.

Liverpool defender Andy Robertson told Sky Sports News it was “not well organised” and a friend he had given a ticket to was accused of holding a counterfeit ticket.

The pregnant brother and sister-in-law of defender Joel Matip have reportedly been forced to flee.

To make matters worse, many Liverpool fans have reported being mugged and robbed by local youths after leaving the stadium.